Recap of Week 15
This was an extremely short week here at the Capitol. While there is still much to be done this session, the House is winding down its business. On Wednesday we passed the final appropriations bill in the House. We are now waiting for the Senate to move forward with their legislative work. At the School Foundation auction held last month Charlie Becker of Monticello made a donation to receive a tour of the Capitol. Charlie redeemed his prize this week for his generous donation and I gave him a tour of the building. I enjoyed visiting with him and appreciate his generosity to the community. I was also visited by some family. Emery and Irene Hines, Mary Squires, and my wife Jacky came to see the Capitol. They are pictured below with Speaker of the House Kraig Paulsen in his office. 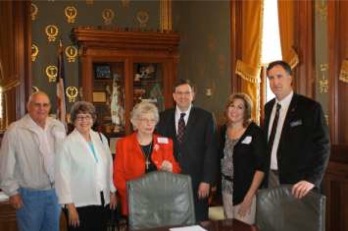 One of the most important duties that needs to be accomplished yet this session is funding for education. In my newsletter is a breakdown of the funding that House leadership is proposing. This plan is a first draft that will surely transform as negotiations take place between the House, Senate and Governor.
As always, you can contact me at lee.hein@legis.state.ia.us or (515) 281-7330. You can read any of my newsletters at http://www.iowahouserepublicans.com/members/lee-hein. Also, if you are ever in Des Moines make sure you stop by the Capitol to visit.
Sincerely, Lee Hein
Governor Approves Redistricting Plan
On April 19, Governor Branstad signed into law HF 682 – an Act providing for congressional and legislative districts and providing an effective date. This sets up the boundaries for the 4 congressional districts, 50 senate districts and 100 house districts.
While there may be some objections out there regarding the new map, the plan is very accurate when it comes to dividing population in each district. While some may not like this map, chances are the next map produced could have been less fair and created even more objections.
With that in mind I voted in favor of the new plan. The House and the Senate both approved the map with few objections. With the Governor approving the plan, these districts will remain in place until redistricting in 2020.
Allowable Growth
• 0% Allowable Growth for FY12 means adding $215 million to the budget. This is new money going to schools. Over the last 7 years no legislature has had to find as much new state aid as we will this year.
New state aid amounts:
FY05 – $109.2 million (2% AG)
FY06 – $82 million (4% AG)
FY07 – $85.5 million (4% AG)
FY08 – $101 million (4% AG)
FY09 – $58 million (4% AG)
FY10 – $112.6 million (4% AG)
FY11 – $55.6 million (2% AG)
FY12 New state aid amounts:
0% AG = $215 million
1% AG = $247 million
2% AG = $280 million
3% AG = $312 million
4% AG = $345 million
• The reason for this is a backfill of $156 million that was underfunded by last year’s legislature, plus $52 million in one-time funds ($47.9 federal stimulus and $5.1 UST transfer), plus an additional $7 million that comes about automatically through the formula.
• If we did not have to backfill FY11, $215 million would be equivalent to about 6.5% allowable growth. 0% would be equal to about $6 million increase in state aid.
• 2% Allowable Growth is $65 million OVER 0% for a total of $280 million
• 0% keeps our promise to the taxpayers that we will not spend more than we take in. 0% limits state spending in the short term and long term.
• What does promising more than we can afford do? FY09 = 1.5% across the board cut ($33 million); FY10 = $31 million underfunding AND 10% across the board cut ($230 million); FY11 = $156 million underfunding; TOTAL = $450 million