With the release of Governor Terry Branstad’s Fiscal Year 2015 budget proposal, many Iowans are giving the state budget a close look.  And with the proposed $507.8 million increase in state spending, people are asking where all this new money is going.

Much of the new spending proposed by the Governor Branstad comes as a result of legislation passed during the 2013 session.  The single largest increase is for the $245 per student increase in state supplemental aid for schools.  With the current enrollment projections for the 2014-2015 school year, this commitment to provide a four percent increase will result in $155.4 million of new financial support to Iowa schools.  In addition to that, schools will also be receiving an additional $50.3 million to fund the various efforts included in the Education Reform package for this year.  These two funding sources will raise the per pupil spending in FY 2015 to approximately $10,000 per student.

For the past several years, the federal government’s share of Iowa’s Medicaid program has been declining significantly.  But the decrease in the federal share had never been as much as it is in FY 2015, when Washington will be sending 2.21 percent less to Iowa.  This amounts to an $86.6 million increase in the state costs for Medicaid and other programs in the Department of Human Services.  With program growth included, the Governor is asking for a Medicaid increase of $97.7 million and an additional $9.1 million for the HAWK-I program.

When these five programs are combined, they account for $433 million of new spending in the FY 2015 budget.  The remaining $75 million of increases address freezing tuition at the three Regents Universities, funding the state’s Technology Reinvestment Fund out of the General Fund, addressing the funding requests of the Judicial Branch, and providing funding for the Governor’s Apprenticeship and Homebase Iowa policy initiatives.

As a whole, 41 percent of new money goes to various levels of Iowa’s education system.  The first year of commercial property tax reform uses 24 percent of the increase.  Medicaid, HAWK-I and the other programs of the Department of Human Services receives 21 percent of the new money.  And the rest of state government gets the remaining 14 percent.

Four different reports have been made with the Altoona Police Department.  One individual was contacted by email, two others were called on the phone and a fourth was contacted on a website. In each case the scammer tried to gain access to a credit card number. The individuals who received phone calls were told they had written bad checks and needed to provide their credit card number to make the issue go away. Other common scams involve the victim “winning” the lottery or inheriting money from a long lost relative. Remember, if it sounds too good to be true, it probably is.

If you have been a victim of any of these scams, immediately contact your local police department to file a report and begin an investigation. You can contact the Attorney General Consumer Protection Division for additional information or to lodge a complaint.

The FBI offers the following suggestions to avoid email scams:

Contact the actual business that supposedly sent the e-mail to verify that the e-mail is genuine.

A Minimum Wage Increase in Iowa?

Last week, House File 2011 was introduced in the House Labor committee.  The bill raises the hourly minimum wage in Iowa, currently set at the federal rate of $7.25 per hour, up to $10.10 per hour, as well as tie the state rate to the Consumer Price Index.  Currently 21 states have a higher minimum wage than the federal rate, including two of Iowa’s neighboring states (Illinois and Missouri).  Iowa last raised its minimum wage just seven years ago in 2007.

When it comes to increases in the minimum wage, the research is mixed, with little to no consensus between economists about its impact on jobs and the economy.  Supporters of a minimum wage increase argue that more money in the pockets of workers creates an economic stimulus to local economies.  Opponents argue however that government mandated pay increases raise the cost of doing business, leading to layoffs of the workers that the legislation is trying to help.

While supporters of raising the minimum wage argue that an increase helps take families out of poverty, many scholars argue that it does not.  Over the last 30 years, the national poverty rate has fluctuated from year to year, but has not steadily decreased.  Between 1980 and 2012 the rate reached a high of 15.2% in 1983 and a low of 11.3% in 2000.  During that same time however, the minimum wage has been raised nine times.  The current national poverty rate is back up to 15%.  Many economists argue that the Earned Income Tax Credit (EITC) is a much better tool at combating poverty by encouraging work while providing households with additional income.  Last year, House Republicans supported a doubling of the EITC’s value as part of the Property Tax Reform package.

Raising the minimum wage is something that should be studied and considered by the Iowa Legislature.  However, the pros and cons must be weighed thoroughly before enacting policy that may hurt employers just because it polls well with voters.  With Iowa’s unemployment rate sitting at its lowest point in five years and new jobs being created each month, does the Legislature want to risk upsetting that situation?  Most agree that a jobs penalty exists as a result of an increase in the minimum wage.  The argument is about how large that jobs penalty is.

Regardless, this will continue to be a hot topic of discussion during the 2014 Session.

The House was not in session Monday in honor of Martin Luther King. All state offices were closed in his remembrance. Tuesday was also a slow day at the Capitol as most members stayed back in their home districts to attend their local caucuses. I enjoyed getting to talk with people back in the district and thought the caucuses were well attended.

A business owner in Manchester brought to my attention an issue dealing with unused gift card and gift certificates. Currently, a business must track the usage of any gift cards or certificates for three years after they are sold. According to Iowa law, after three years any remaining balance on the card must be turned over to the Treasurer and goes into the state general fund. The money has to be turned over even if the customer wants to use his remaining balance after the three years. I believe that money belongs to the business and not the state. I am proposing a bill would allow the business to keep the money in case the customer comes back to use their remaining balance. The current law especially hurts small business because they are forced to abide. Bigger corporations, however, can shuffle these gift cards to their entities in neighboring states. That gives big business an unfair advantage. Currently, Iowa is the only Midwest state that practices this.

Wednesday night was the Iowa Pork Producer Association’s annual event in Des Moines. I got to chat with a couple farmers from the district on current issues. I attended another event that night where I had a good discussion with the past presidents of the Iowa Corn Growers Association. 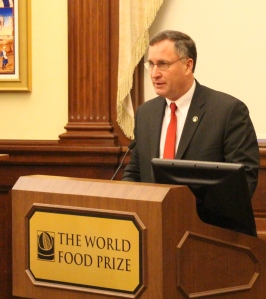 Speaking at Hearing for the Heartland

On Thursday I spoke at the Hearing in the Heartland sponsored by the Governor in support of the renewable fuel standard. The EPA is considering changing standards that would hurt Iowa farmers and may cause gas prices to rise. Other people who spoke include Congressmen King and Latham, Ag Secretary Northey, and Governor Branstad.

Friday morning you can hear me on 600 WMT at 10am for the legislative hour. That afternoon I will be at the Jones County Economic Development Forum from 12pm to 2 pm. It will be held in the Monticello City Council Chamber. On Saturday, I’ll be attending the Dubuque County Farm Bureau Forum at Golfside Grill in Dyersville from 10am to noon. Both forums are open to the public and I encourage you to attend.

If you have any questions, comments or concerns about these topics or any others please feel free to contact me by e-mail at lee.hein@legis.iowa.gov or by phone at (515) 281-7330.