The first pieces of the governor’s larger Home Base Iowa initiative are starting to see action. Last week House Study Bill 512 passed the House Veteran Affairs Committee unanimously. The bill allows private sector employers to grant a preference in both hiring and promotion to veterans and some spouses. The preference applies to veterans as defined in Iowa Code currently. Private employers will also be able to grant this preference to the spouses of veterans who have a permanent, service-connected disability or who lost their lives while serving on active duty during a time of military conflict. The preference is optional for private sector employers, and can only be granted as far as is consistent with federal law and regulations.

In addition to the private sector hiring preference, another part of the Home Base Iowa initiative cleared the House Veteran Affairs Committee unanimously this week. House Study Bill 615 requires that the boards of directors for all community colleges and the regent universities file an annual report on veteran education statistics starting December 15, 2015. The report is to be filed with the governor and the general assembly. The report is to include statistics and information related to the awarding of educational credits to veterans for their military education, training, and experience. The report is to include this information for the prior five academic years.

Both bills now advance for further consideration on the floor or by another House Committee.

The State Patrol has released statistical information on the department from 2012 and 2013.

Along with regular State Patrol work, officers also assist local law enforcement agencies, averaging 23,500 hours of assistance a year. In the past five years more than 116,000 hours of support has been given to local departments. This support includes tactical team deployments, crash investigations, response to natural disasters and high risk incidents. The Iowa State Patrol is available 24 hours a day to assist other agencies with Aircraft support, K-9 Services, and crisis negotiation.

The Public Safety Committee has heard from Commissioner of Public Safety Larry Noble and Colonel Robert Garrison of the Iowa State Patrol. Both men explained the importance of staffing for the State Patrol and why strong financial backing from the State is essential to public safety in Iowa.

As the Iowa Legislative Session continues, Representatives and Senators will meet to discuss budgeting and personnel needs of the Iowa State Patrol and they will determine how much additional assistance can be provided by the state for the Patrol.

For the second time in a year, the Obama administration is giving employers more time to offer health insurance.  The Treasury Department announced Monday that only employers with over 100 full-time employees will be required to offer insurance under the Affordable Care Act (ACA).  Companies with full-time payrolls exceeding 100 will also catch a break, as the new rules require that they purchase insurance to cover 70 percent of their workforce.

The decision to further delay the mandate means that only 3 percent of Iowa employers will be required to offer health insurance in 2015 and most of them already do today.  Those that already do were also largely grandfathered into compliance under the ACA in 2010.  But employers that do not currently offer insurance face a huge change.

The National Restaurant Association, which represents 500,000 members with employees on the cusp of receiving benefits, welcomed the news as something that helps their members comply with the ACA’s mandates.  While the change exempts the large number of small employers clustered across the country, large employers–whose employees represent a far larger fraction of the workforce—still face the prospect of complying with the law.

The law originally mandated all companies with 50 or more full-time employees to offer health insurance coverage in 2014.  A large majority of Iowa employers have fewer than 50 employees and escape the mandate.  The law defines a full-time employee as one that works 30 hours or more per week.

The Treasury Department’s rules made some significant changes regarding classification of employees under the ACA.  Seasonal employees—at department stores or on farms—are considered full-time only if they work at least half the year.   The department clarified that teachers are considered full-time employees though they take summers off, but adjunct faculty members are counted as working 2.25 hours for every hour spent in the classroom.

The fifth week of session brought the first bills to be debated on the House floor. We passed House File 2109 which bans the sale of nicotine containing e-cigarettes to minors. Under HF 2073, doctors would be prohibited from dispensing abortion-causing drugs remotely through a video-conferencing system. This legislation was approved Tuesday in the Iowa House.  Both bills passed with bipartisan support. They now move to the Senate for their consideration. Thursday the House passed two more bills. The first was a technical fix to the hours vs days requirement in last year’s education reform bill. Secondly, we passed a bill that moves the legislature-set supplemental state aid (formally allowable growth) to the two year budgeting process. For a number of years, the Legislature has broken the law by not setting supplemental state aid on time. This is because we do not know the revenue stream the State will have. We don’t want to over-promise only to have to do an across the board cut later. Moving to the two year process allows school districts to be confident in dollars the state commits.

Members of the Jones County Farm Bureau visited the Capitol this week. We had a good discussion about current issues they face. Wednesday I met with Larry & Nancy Shover of Delhi and Mike & Jenn Hosch of Cascade at the Grow Iowa Agriculture breakfast at the Capitol. I was pleased to chat with them about Governor Branstad’s proposal for $2.5 million in agriculture research at Iowa State. Sherri Hunt from Anamosa was also at the Capitol this week with for Early Childhood Iowa Day on the Hill. I love to meet with folks from back home. If you are planning a trip to the Statehouse, email so we can set up a time to meet.

A bill I sponsored, House File 2088, cleared another legislative hurdle this week. HF 2088 passed out of a three member subcommittee and the full House Commerce committee unanimously. The bill would allow business owners to keep the balance of gift cards or certificates their customers haven’t used. Currently, businesses must turn over any card balance to the State three years after it’s issued. As I pointed out a few weeks ago, no other state around Iowa has this sort of law. Bigger businesses can funnel their unused balances to entities in surrounding states, but small Main Street businesses don’t have that option. The cost of bookkeeping to track the gift cards is also cumbersome. The bill would keep more money in the hands of business owners, not the Government’s. The bill now moves to the floor of the House for consideration.

Thursday was STEM (Science Technology Engineering Math) Day on the Hill. Every year students from across the state come to the Capitol to display special projects that they’ve been working on. Below is a photo of myself with Drew Fayram of Anamosa and Rachel Greenberg from New York. Both are current fellows at the State Hygienic Laboratory. Drew and Rachel were two of only 15 fellows in the country to be selected. 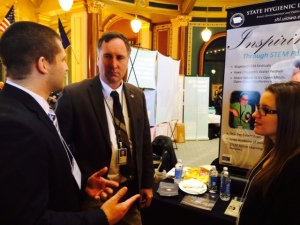 If you have any questions, comments or concerns about these topics or any others please feel free to contact me by e-mail at lee.hein@legis.state.ia.us or by phone at (515) 281-7330.