House Republicans announced this week that they had reached agreement with Senate Democrats on the size of the Fiscal Year 2015 state budget.  Next year’s general fund budget will spend $6.9718 billion.

The overall budget will spend 99.84% of on-going state revenue.  This is just 91.14% of the allowed amount under the state’s expenditure limitation law.  The agreement also complies with House Republicans four budgeting principles:

In addition to reaching agreement on the overall size of the budget, House Republicans and Senate Democrats also agreed to the allocation of funds amongst the seven budget subcommittees.  The FY 2015 budget breaks down as follows: 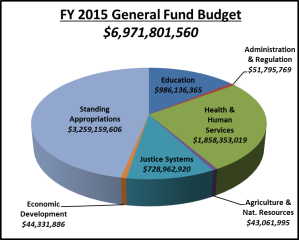 Within the budget targets, the state will meet the commitments made by the Legislature and Governor Branstad in the historic 2013 session.  Funding is provided for the 4 percent increase in supplemental state aid for schools, funds the Education Reform agreement, and implements the commercial property tax bill.  Additionally, the budget provides funding levels to ensure a second year of tuition freezes at Iowa’s three Regents universities.

The agreement on joint budget targets between the Republican-controlled House and the Democrat-controlled Senate is a first in recent legislative history.

Transforming the budget targets into budget bills will begin on Thursday, March 6 as budget subcommittees will resume meeting that morning.

Iowans value their right to privacy, and this year the Iowa House is working hard to prevent individuals and the state from violating that privacy. So far, House Republicans have passed three major bills aimed at protecting the privacy of Iowans in their home, travels and online. House File 2368 allows a parent or guardian to protect their child from identity theft, House File 2289 prevents the government and others from using unmanned aerial vehicles to invade privacy at home and elsewhere and House File 2278, which limits the collection of information from Regional Transit Authorities, have all been sent to the Senate for their consideration.

Under current law, a person over the age of 18 may place a security freeze on their credit through a consumer credit agency. A security freeze prevents a credit reporting agency from releasing credit report data without consent and helps prevent identity theft by stopping others from opening credit cards, bank accounts and obtaining loans with another’s identity. Unfortunately, the law did not protect children from identity theft. Under HF 2368, a parent or guardian of a person under 16 can request a security freeze be placed on the persons credit. This security freeze is also available to people who have had a guardian appointed. There have been numerous cases of people stealing children’s identity and opening bank accounts, credit cards and even taking out home loans. Because no one ever worries about a credit score of a child, most parents never think to protect their child’s credit report until it is too late.

New technology makes it very easy for the government or private citizens to follow, observe and record an individual for various purposes. Nothing in Iowa code currently regulates the use of Unmanned Aerial Vehicles (UAV’s), House File 2289 is focused on changing that and ensuring the privacy of Iowans is protected. Under the proposed bill, government agencies could not acquire UAV’s without approval and once they acquire the UAV’s they cannot record data without a warrant or in very limited emergency situations, with court approval. Additionally, individuals could not use UAV’s to stalk, harass or intimated others. Currently the Federal Aviation Administration is working on guidelines for UAV use, but it could be several years before they are fully developed. House Republicans did not want to wait until UAV’s were commonly used before acting to protect the privacy of Iowans and ensure that when UAV’s are used it is in accordance with good law.

House File 2278 limits how regional transit data can be shared with organizations, businesses and government agencies. Regional transit districts could soon be changing the way they collect fares in some situations. Passengers may be more likely to use cards to pay the fee to ride and these cards can be used to collect data on the rider. House File 2278 specifically limits how that information can be used and shared even if a company is paying for the fare. A regional transit district would be prohibited from releasing specific information about a rider. Instead, only aggregate data would be allowed to be disclosed to government entities, organizations, school districts, educational institutions and employers who subsidize or provide fare cards for individuals. This would prevent anyone from accessing where a specific individual traveled.

Privacy issues will continue to come up throughout the legislative session. These three bills are currently waiting for subcommittees in the Senate. If the Senate fails to act within the next 7 days, then it is doubtful that these privacy bills will become law this year.

Site Selection Magazine ranked Iowa sixth in list of states with the largest number of projects per capita in 2013.  Iowa won the per-capita ranking with 104 projects overall.  Qualifying projects have to have a minimum $1 million capital, at least 20,000 square feet of new construction or create at least 50 new jobs.  Texas, Ohio and Illinois took the top three rankings based on total projects alone.

Meanwhile, the Creighton University index of nine Midwestern and Plains states dropped slightly in February, reflecting extremely cold weather that hurt winter sales.  Iowa kept its lead in the region, as the state’s score reached a high of 64.5.  Index scores above 50 indicate a state’s economy is expanding over the next few months.  Iowa particularly benefit from manufacturing and agricultural equipment sales.  The index surveys supply managers in a nine-state region.

The House and Senate leadership released their budget targets this week. House Republicans and Senate Democrats agreed to the targets after looking through and analyzing Governor Branstad’s budget proposal. The budget, which funds Fiscal Year 2015, spends a total of $6.9718 billion. That is 99% of on-going revenue. It’s also 91 percent of the spending limit set by law.

It’s important to note this budget spends less than the state takes in. We will not use one-time money (like federal stimulus dollars) to fund on-going needs. We will not balance the budget by intentionally underfunding programs, and we will return tax dollars to Iowa’s taxpayers. Iowans expect us to come to Des Moines and work across isle to compromise and get things done. We will not resort to Washington D.C. bickering and gridlock. I’m proud we could all come together to accomplish a budget that meets the principles of Iowans.

We voted nearly 40 bills out of the House this week. One was House File 2368. The bill allows a parent or guardian of a person under age 16 to place a security freeze on the child’s credit. The freeze prevents a credit bureau from releasing credit card data without consent. This helps prevent identity theft by stopping others from opening credit cards and bank accounts with the child’s identity.

I will be at the Manchester Legislative Forum Friday the 7th. The forum runs from 9:30 to 11:30 and is open to the public. I encourage you to attend. I will be at the Delaware and Jones Republican County Conventions this Saturday. Both run from 9 am to noon.

If you have any questions, comments or concerns about these topics or any others please feel free to contact me by e-mail at lee.hein@legis.iowa.gov or by phone at (515) 281-7330.